8 Key Insights on FDI from Global CEOs
an Analysis of the 2019 A.T. Kearney FDI Confidence Index

A.T. Kearney recently released their 2019 Annual FDI Confidence Index. This wide-ranging survey of company executives worldwide gives a good indication of how companies and their leaders feel about investing in markets around the world. One of the most striking outcomes of the study, as acknowledged by the authors, is the seeming mixed messages throughout. Overall confidence in investing in foreign markets is high, however this is belied by a relative downward trend in FDI in recent years. Developed markets are the highest ranked in terms of investment attractiveness, however they are also seen to be fraught with risks.

The following will cover what we at ROI see as the main takeaways from the report.

1. Most improved and the Biggest Losers

The countries that have improved the most in the rankings year over year are all from Western Europe, with Denmark, Spain, Austria, and Belgium all jumping up a number of spots in the rankings. This is likely due to increased interest in EU markets due to uncertainty surrounding Brexit. On the other end of the spectrum, the countries that have seen the most marked decreases in rankings are Mexico, India, and Switzerland. It is important to note that while these three countries have fallen down the rankings, they have actually shown incremental increases in their scores, they just have not grown as fast as their neighbors! 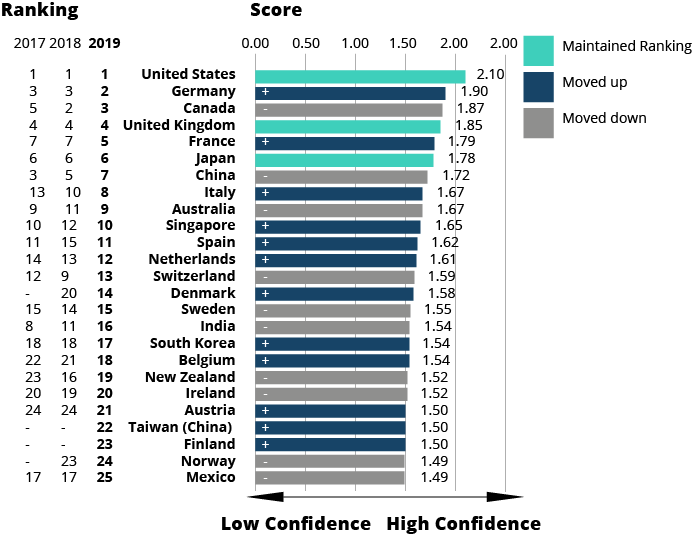 Investors perceive the largest potential risk factor for investment in Developed Markets as political instability, with 29% expressing this concern. This is the first time this risk has been perceived as higher in Developed Markets when compared to Emerging Markets. This mostly revolves around political instability in the EU surrounding Brexit, and trade disagreements between the US and China.

What developments from among the following do you think are more likely to occur in the next year? 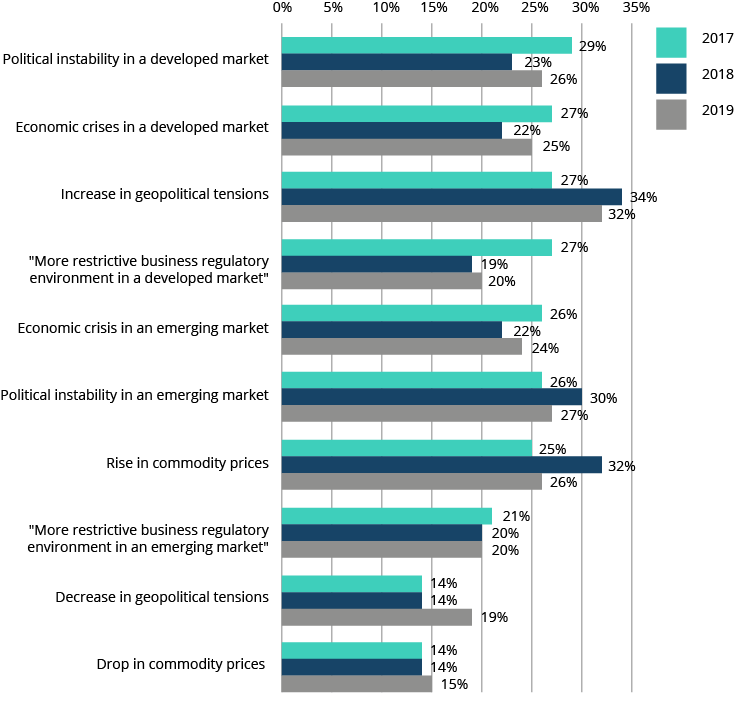 Over three-quarters of execs expect to increase their level of foreign investment over the next three years! This combines M&A, JV, and greenfield investments. The authors attribute this to companies’ desires to localize their products and operations in their target markets.

How will your company’s level of FDI change over the next three years? 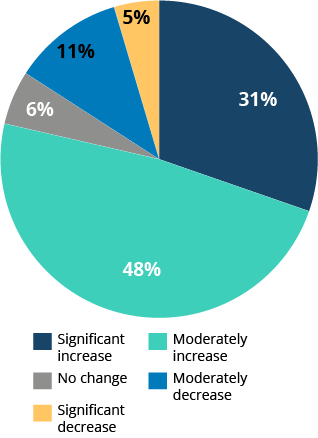 However, this optimism is offset by a harsh reality – FDI flows have been decreasing steadily since 2016. This is due to a number of factors, but the largest decline is seen in FDI in developed countries. The US tax cut of 2017 is attributed as a key factor for this, as US companies are keeping more money at home, as opposed to funneling through foreign investments.

5. How does your company grow?

There has been a gradual shift away from greenfield investments as a priority for companies. While this has never been the #1 path to foreign investment, companies are putting more focus onto a “blended” strategy of FDI, combining M&A, JV, and greenfield strategies. This gives companies more flexibility to partner with or acquire a local player, and then invest and grow the business accordingly.

By which mode does your company typically engage in FDI

An important question for an economic developer is “which of my assets should I promote to potential investors”? Well, on a national-level, it seems that tax rates and ease of tax payment are the most important. This is followed by the country’s innovation capabilities. This is not surprising, given the global growth of connected technologies and increased investment in innovation. Availability and cost of labor are also critical, while incentives are also being considered.

What are the most important overall factors in choosing where to make investments? 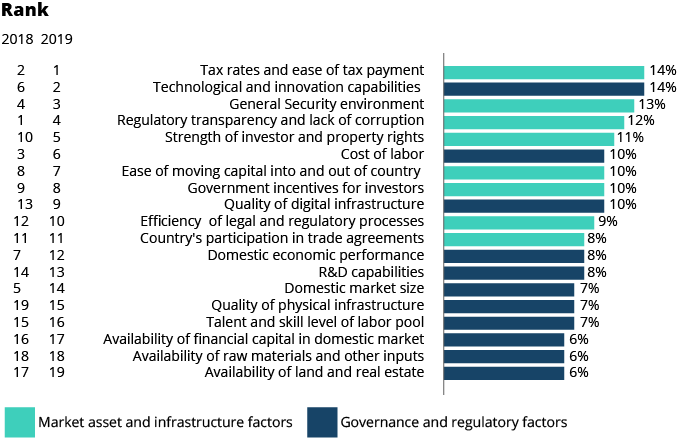 On a regional/city level, there is some variance from the factors above. As companies have chosen a country to locate into, how do they then decide which region to invest in? A strong regional economy is by far the most important factor. This speaks to a strong existing cluster, growing population, and proactive local administration. Following this is labor affordability and cost, and the overall size of the region. Incentive programs, again, are prevalent in the top ten.

Which of the following factors are the most important in choosing in which cities to invest? 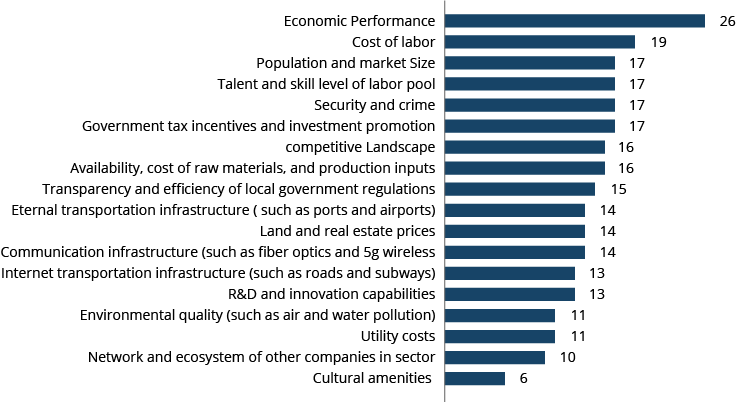 Executives indicated that they are increasingly become more engaged with local stakeholders where they operate, with almost two thirds saying they are more engaged in the past than they were previously. This speaks to the value an economic developer can bring to a company through a comprehensive BRE program – connecting companies to local universities to help develop the workforce, engaging with the supply chain to find efficiencies, and of course opening up new avenues for revenue growth through export support and promotion.

To what degree does your company engage with local stakeholders in the cities in which it operates? 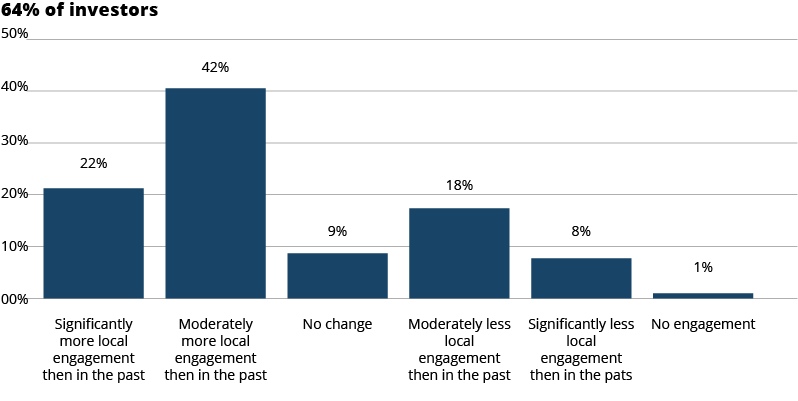