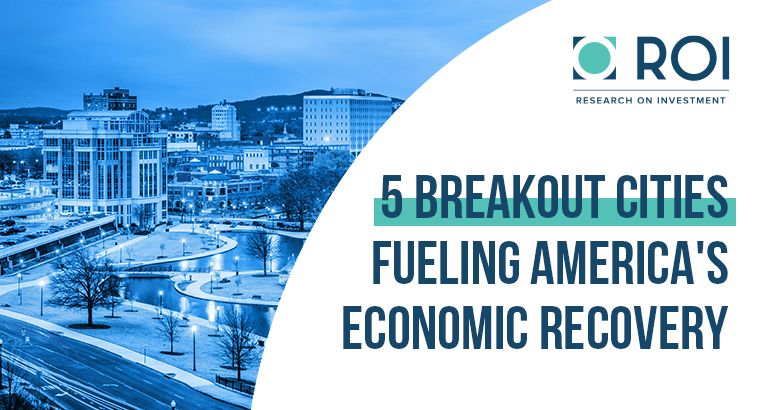 The economic recovery that followed the COVID-19 crisis in the United States seems to have taken everyone off guard. Its speed and comprehensiveness in some areas dwarfed the bounceback felt in other, less lucky jurisdictions. The resilience shown by some industries didn’t seem to be matched by less vulnerable ones.

But overall, the pandemic recovery has highlighted the phenomenal economic strength of many American cities and regions. While some may not have heard of them before, cities like Frisco, Texas and Bend, Oregon have defied the odds and come roaring back.

What Draws People In

Helping to drive the mid-size city boom are a number of factors that appeal to families both young and old.

Millennials and young families are attracted by affordable home pricing, while people of all ages enjoy shorter commutes to work with less of the overwhelming traffic one might find in a city like Los Angeles or New York.

More accessible daycares and schools drive families with young children to seek out lesser-known cities. And many of these cities host business-friendly regulatory regimes and tax incentives that draw in small and mid-sized companies.

Finally, the picturesque settings of “Small Town, USA” might seem sleepy to a die-hard urbanite, but these slower-paced cities with low crime rates and reduced congestion appeal to many who are tired of the sky-high prices and endless bustle offered by many big cities.

Florida, as a whole, has done quite well in the aftermath of COVID-19. CNN’s “Back-to-Normal Index” shows the state as being 98% back to where it was before the pandemic struck. And perhaps no city in the state has done as well as Cape Coral. Its Office of Economic and Business Development reports that it is growing by 2% per year, putting it in the Top 10 cities in the US. It also has a median age of just 42 years old.

In virtually every metric, from safety and crime to home affordability and navigable business regulation, Cape Coral Florida scores well. All of this combines to make Cape Coral the second-most “Up-and-Coming” city in America, according to The Neighbor.

Job growth is projected to top 40% over the next ten years, almost 7% higher than the United States national average.

With a population of just over 108,000 (as of the 2010 Census), residents have the opportunity to get to know their neighbors without running out of things to do and places to see.

The fastest-growing city in the United States from 2000 to 2009, and again in 2017, Frisco, Texas is no stranger to rapid expansion. A city that started as a quiet suburb of Dallas just 6000 citizens strong, Frisco is now home to the Dallas Cowboys headquarters, the Professional Golfers’ Association headquarters, and the “North Platinum Corridor,” a stretch of commercial real estate that may one day grow to dwarf Dallas’ own downtown office space. 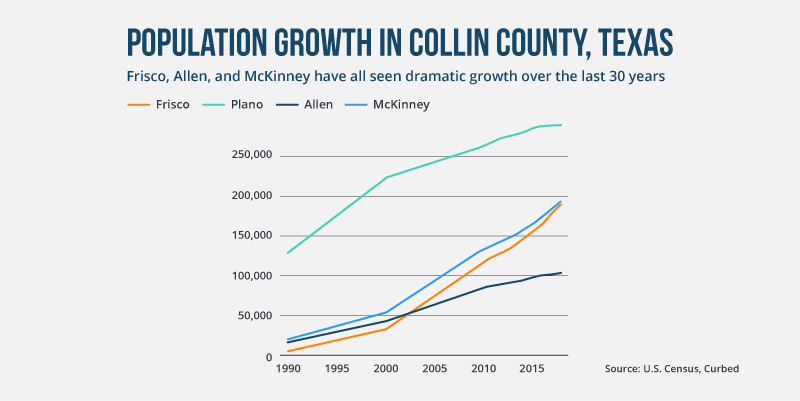 Careful urban planning and engineering have characterized Frisco’s growth, and much of its appeal can be attributed to its beautiful suburban neighborhoods and amenities.

At the same time, its proximity to Dallas, itself a growing economic powerhouse, and the usual suburban attractors of lower amounts of traffic, congestion, and crime, all contribute to drawing in thousands of new residents every year.

In Bend, Oregon, residents are just as likely to report being attracted by the city’s natural wonders as its world-class amenities and neighborhoods.

Incredible monuments to nature, like Drake Park, Mount Bachelor, and the Newberry National Volcanic Monument decorate the local landscape. There is virtually nothing the local scenery doesn’t offer to outdoor enthusiasts of all kinds, from rock climbers to bird watchers.

Bend has a population of around 100,000 and boasts a thriving tourism industry that hosts people from around the world seeking out its ski lodges and hiking trails. Amazingly, despite being a 10-hour drive away, tech workers from San Francisco have started living in Bend and commuting to the tech hub. They report that housing prices are just so attractive in Bend, and so astronomical in San Francisco, that the drive has become worth it.

Future job growth in Bend is predicted to be about 57% over the next ten years, a stat almost twice as high as the national average.

Meridian, Idaho’s population is estimated at around 114,000 people. These folks live between prime agricultural farmland to the west and mountains to the east, in a picturesque area known as Treasure Valley.

Best Places reports that the unemployment rate in Meridian is extremely low (even during the post-Covid recovery) and hovers at around 3.4%, almost half the national average.

Median home prices in this city remain affordable, crime rates are low, and, despite this, the cost of living is only marginally higher than the national US average. It’s also an approximately 20-minute drive to Boise, the state capital, making it a prime choice for commuters from the larger city to the east.

The mid-sized cities listed above are just a handful of the thousands of places scattered across the United States that attract city-and country-dwellers alike. Their unique combinations of small-town feel and city amenities are driving much of the cross-country post-pandemic rally in the United States.

These resilient and welcoming cities are at the forefront of America’s economic recovery. It’s no wonder that hundreds of thousands of people from all walks of life are making an effort to call one of these places “home.”