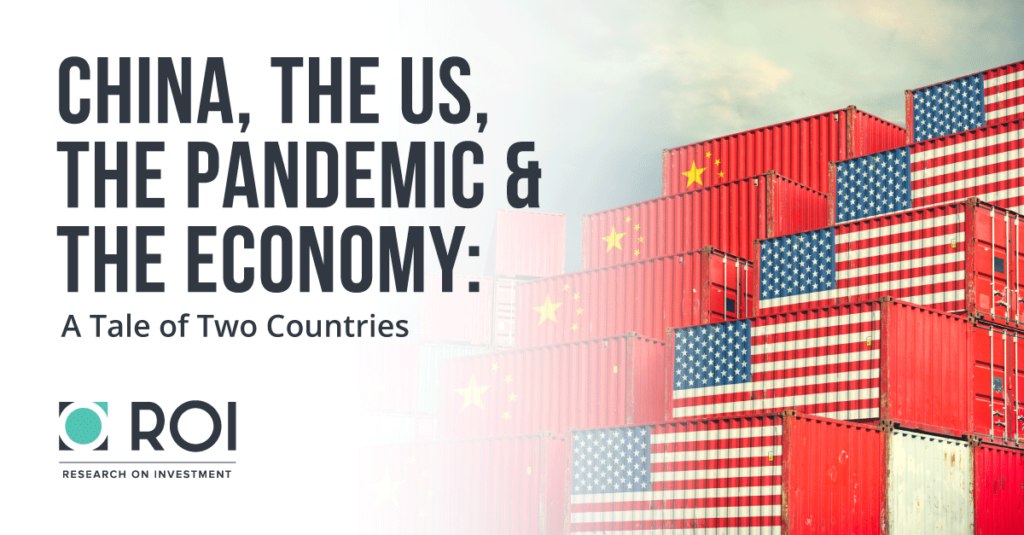 2020 is the first time in history that FDI in China overtook that of the US. China is now the world’s largest recipient of foreign companies’ investments.

The last time China had to digest economic numbers as dreary as 2020, was in 1976 when the country was still ruled by Chairman Mao. However, as negative as this may sound, the news is actually good! Chinese officials are pointing to positive growth. And they’ve been doing so since the second half of 2020.

As one might expect, the first quarter of last year was abysmal because of the nation-wide lockdown, with the economy contracting by almost 7%. Amazingly, the economy has been picking up ever since, with 6.5% growth in the most recent quarter.

Moreover, the Chinese surplus over its trading partners last year also expanded. How is this all possible you ask? The Chinese economy was ahead of the curve in dealing with the fallout from COVID and the top-down power structure in China allows the government to contain the virus relatively quickly.

As a result, by late spring and early summer of 2020, the country was ready for business to re-open. On top of the country’s early return to business, the government has been implementing policies to further stimulate the economy, including:

The Chinese economy has further benefitted due to soaring global demand for PPE and medical supplies, many of which are made in the country. All of these contributed to GDP growth in 2020. 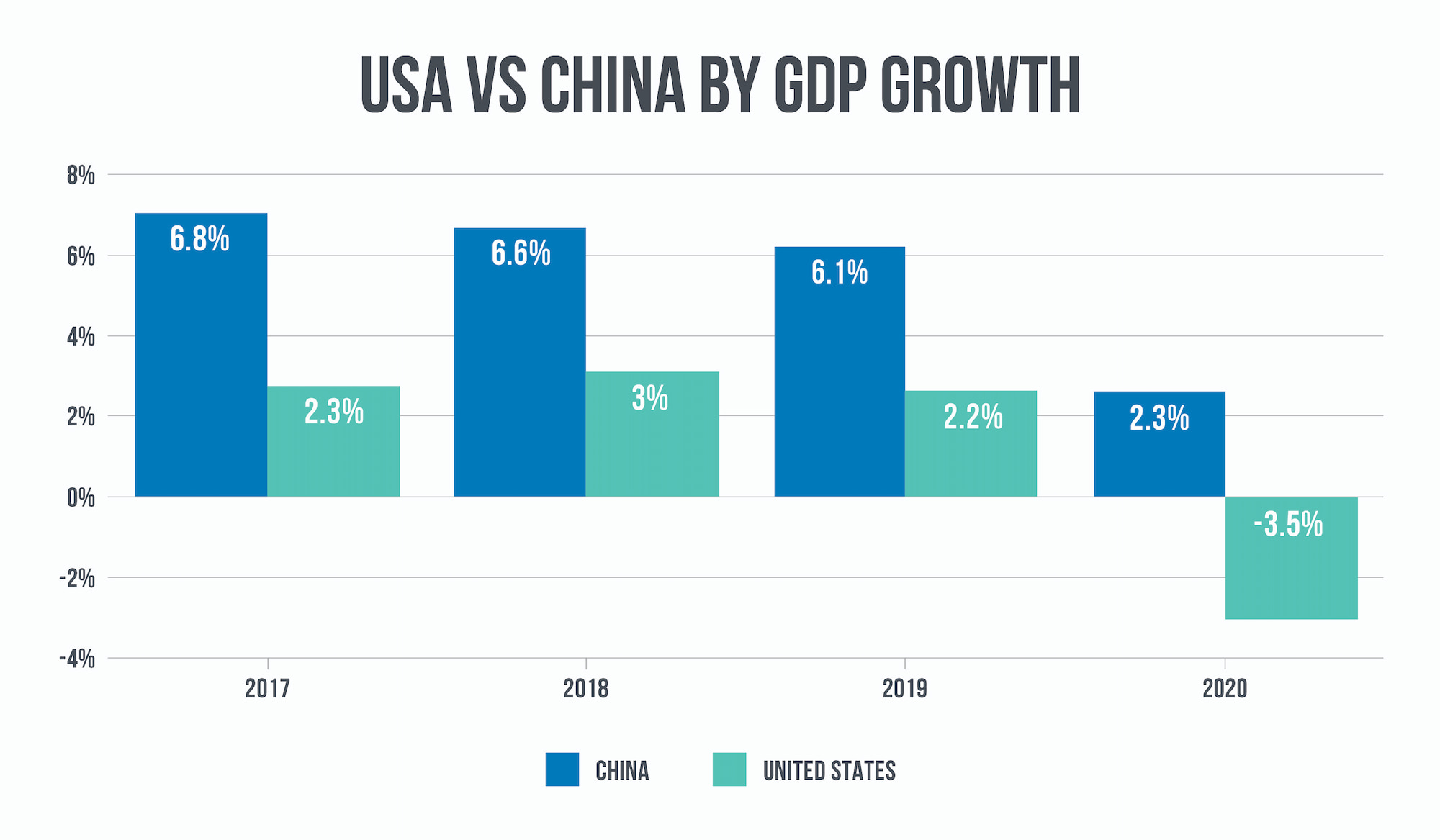 A Quick Look at FDI in China vs the US

From an FDI perspective, foreign companies are turning to China’s booming economy and superior management of the Covid-19 pandemic. FDI in China grew by 4% to $163 billion in 2020.

By contrast, FDI in the US decreased by a whopping 49% to $134 billion last year, according to the United Nations Conference on Trade and Development.

While Covid-19 was a large factor in the drop of FDI in the US, the decrease in foreign companies’ American investments  began well before the pandemic. 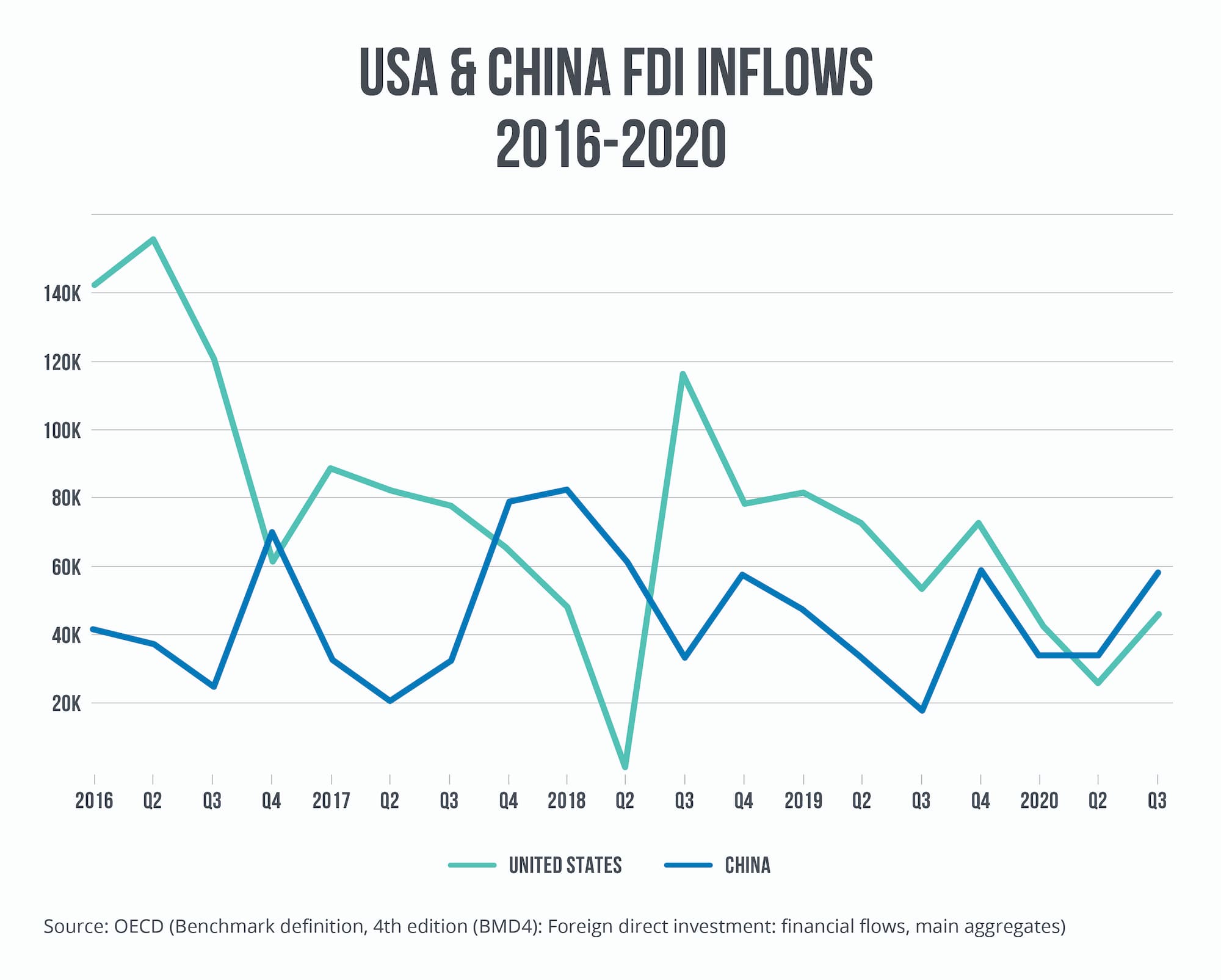 According to the US Commerce Department, foreign investment in the US reached a peak of $440 billion in 2015 and has been on a sharp downward slide ever since. Former President Donald Trump’s trade policies hurt foreign investment — particularly from China, which represented the sharpest drop in US investment over the past several years. Growing economic uncertainty around the globe also contributed to the decline.

The decline of foreign direct investment into the US in 2020 was most prominent in wholesale trade, financial services and manufacturing. International mergers and acquisitions, as well as sales of US assets to foreign investors, fell by 41%.

At the same time, China’s relatively quick recovery from the pandemic, coupled with robust economic growth, led foreign investment to grow aggressively in 2020. The Chinese economy grew by 2.3% as the vast majority of major global economies shrank.

FDI Around the World

FDI to India has similarly skyrocketed, from less than $25 billion in 2014, before Prime Minister Narendra Modi took power, to $57 billion last year, an increase of 13% over 2019.

Most economies weren’t as fortunate. FDI in the UK and Italy fell by almost 100%. Russia’s FDI fell 96%, Germany’s sank 61% and Brazil’s plunged by 50%. Australia, France, Canada and Indonesia — all among the top FDI recipients in 2019 — also fell by double digits.

« The effects of the pandemic on investment will linger, » James Zhan, director of UNCTAD’s investment division, said in a statement. « Investors are likely to remain cautious in committing capital to new overseas productive assets. »

According to UNCTAD data, Greenfield project announcements in 2020 are 35% lower than in 2019, do not bode well for new investment in industrial sectors in 2021,” the report says.

UNCTAD expects any increases in global FDI flows in 2021 to come not from new investment in productive assets but from cross-border M&As, especially in technology and healthcare – two industries affected differently by the pandemic.

“Although their investment activity slowed down initially in 2020, they are now set to take advantage of low interest rates and increasing market values to acquire assets in overseas markets for expansion, as well as rivals and smaller innovative companies affected by the crisis.”

India and Turkey are attracting record numbers of deals in IT consulting and digital sectors, including e-commerce platforms, data processing services and digital payments.

According to Jared Bernstein, Member, White House Council of Economic Advisers, the February 4 employment report revealed a stall in the American job creation machine and underscores how precarious a situation the economy is in. Looking at the data, the US economy added 41,000 jobs in January of this year after losing 227,00 jobs in the month of December. The three months trend is a weak 29,000 new jobs per month that compares poorly to the prior three months which was closer to 1,000,000 new jobs.

Bernstein continues: “This pace is far below the rate necessary to pull the US out of the pandemic jobs deficit.” There are about 10 million fewer jobs now relative to February of 2020. Moreover, the unemployment rate fell to 6.3% which remains almost 3 points above the rate of February of 2020 (3.5%) before the pandemic. Over the same period more than 4 million workers have dropped out of the labor force (not counted in the unemployment statistics), which have been disproportionately women.

In January, according to the Bureau of labor Statistics just under 15 million people reported that they were unable to work because their employer closed or lost business due to the pandemic. This number has been about the same since October after falling in the wake of the implementation of the CARES Act from May to Sept. Long term unemployment has risen reflecting the duration of the economic crisis. Almost 40% of the unemployed in January had been so for 27 weeks or more). 40% is an elevated rate and represents a shift from temporary lay offs to permanent unemployment.

Workers of Color and Women

Workers of color have been more likely to lose their jobs than white workers. In January, the unemployment rate for black workers was 9.2% and was 8.6% for Hispanic workers. Compared to 5.7% for whites and 6.6% for Asian workers.

While the unemployment rate for men and women was relatively similar, women have left the labor force in numbers that are of great concern. The employment rate among prime age workers (women between the ages of 25-54 is down 4 percentage points, representing 2.6 million women since February of last year. This larger decrease for women is unusual during recessions and likely reflects both the industries that this pandemic has hit (tourism, services, leisure and hospitality) and increased care responsibilities that have been pulling women out of the labor force.