Investment Heroes of 2021 To The Rescue: Capital Expenditure In The Covid Era 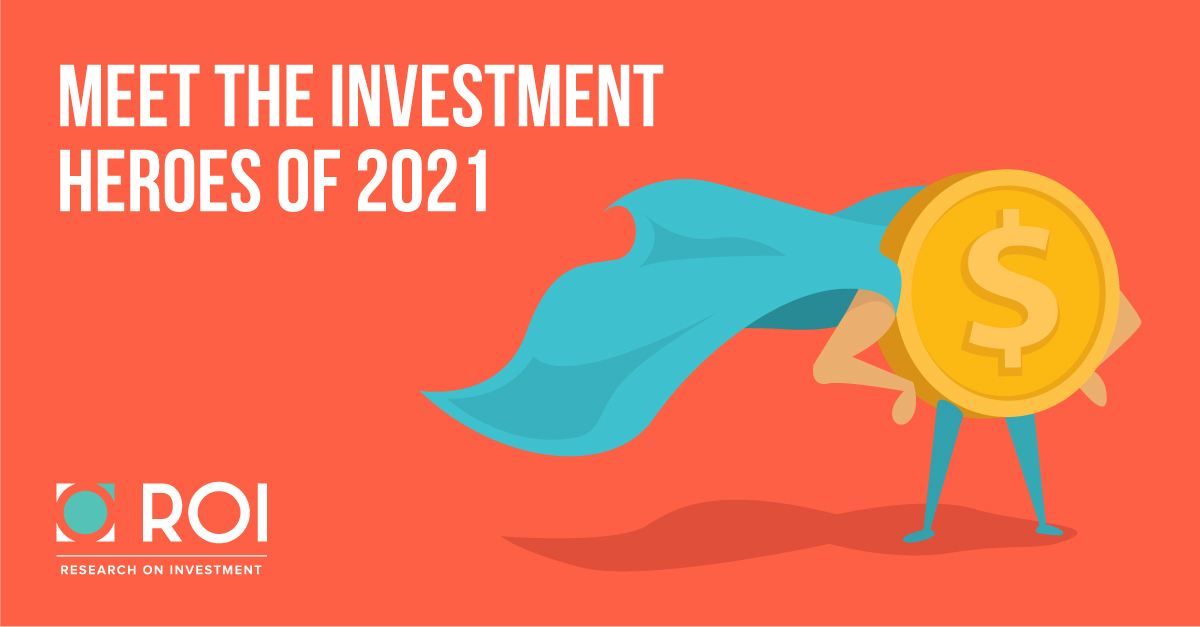 2020 was a lot of things. Extraordinary, unusual, and filled with challenges and opportunities. Despite the obstacles, however, loads of American companies displayed extraordinary resolve and resilience. Many of these firms invested billions in human and physical capital. In turn, their confidence in the ultimate viability of the US economy buoyed the overall economic picture, preventing a bad situation from becoming even worse.

So, which companies are most responsible for throwing the United States a lifeline when it needed one the most?

On June 1, 2021, the Progressive Policy Institute (PPI) released its annual Investment Heroes report. The report estimates domestic capital investments by major public companies based on their financial disclosures and lists the 25 biggest spenders each year.

For the 2020 calendar year, the report concludes that the top 25 contributors to US capital expenditures spent a whopping $216 billion in this country.

Before we go any further, we should note the obvious and point out that Amazon was responsible for $33.8 billion of this total, which was, by far, the highest amount of any one company. Given the size and wealth of Amazon, we don’t think anyone is shocked by this.

What is interesting, however, is that Amazon’s year-over-year capital spending in the US increased by 75%, despite the pandemic. In fact, like many e-commerce companies, much of Amazon’s capital investment was likely motivated by the large increases in demand during the pandemic.

The Expansion of Tech

Take a look at this chart, showing overall capital expenditures in the US by sector: 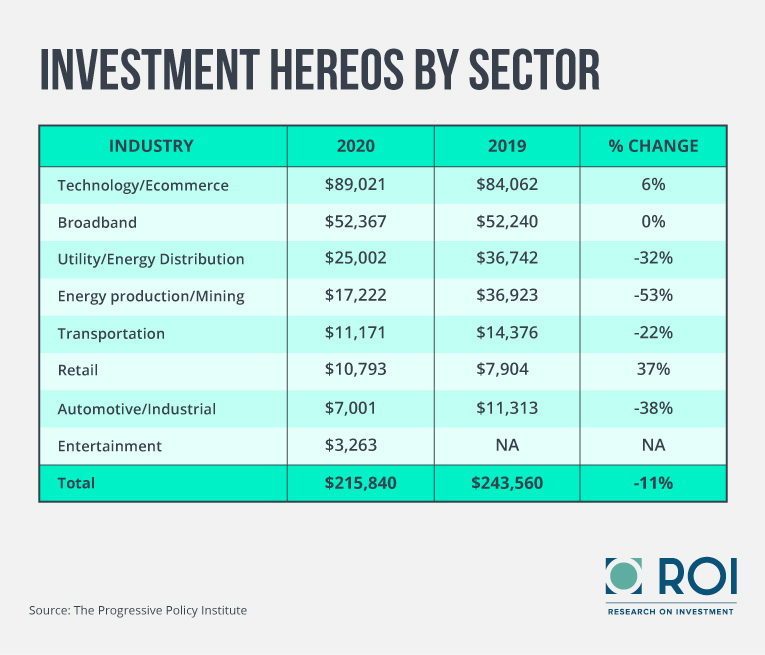 Tech and e-commerce dwarfed the next biggest category, broadband, which is arguably a subsector of the tech industry anyway!

Also notable is the fact that, with the exception of retail, technology and e-commerce is the only sector that saw an overall increase in the amount of capital expenditure compared to last year. To put it another way, while virtually everyone else was reining in spending and cutting costs, tech and e-commerce were putting people to work and food on the table.

Arguably, 2020 is the first large-scale demonstration of the amazing resilience of the tech industry in the face of unprecedented global challenges.

There’s something else that’s odd about tech’s presence atop the capital expenditure chart included above. Technology and e-commerce industries are not known for being particularly capital intensive. After all, the Alphabets and Facebooks of the world exist largely online and in servers.

Compare that to industries like energy production and mining or the automotive sector. These are “nuts and bolts” industries with large physical footprints and huge capital requirements.

Despite this discrepancy, the tech and e-commerce industry outspent the utilities, mining, automotive, and transportation sectors combined.

Alphabet (which owns Google), Facebook, and Microsoft all made the list. Facebook, in particular, is not the first company one thinks about when someone mentions the word “capital expenditure.” But the social network has grown so large that its requirements for data centers, servers, network infrastructure, and office space are seemingly insatiable.

Second, and as we touched on above, the technology industry doesn’t seem to share the same vulnerability to market downturns as more “traditional” sectors. And that’s great news should we encounter another black swan event like the Covid-19 pandemic. The tech industry might act as a kind of hedge against more serious economic damage.

Incentives to invest in America

The PPI Investment Heroes 2021 report touches on policies announced by the Biden administration and their potential effect on capital expenditures by major employers and companies in the US.

They note with optimism the importance of the American Jobs Plan and highlight that proposal’s promises to revitalize American infrastructure and supply chains. They’re also positive about proposed increases to research and development spending in the US, particularly given that the biggest capital spenders are information technology companies that rely heavily on new tech and inventions to drive their growth.

PPI is more pessimistic about the plan to increase the base corporate tax rate included in the Made in America Tax Plan. They’re concerned that it may suppress further investment at a time when the economy is still fragile.

We’re less worried about that future possibility. However, it comes paired with powerful new global initiatives to create a global minimum corporate tax rate that would, arguably, reduce the incentive for companies to headquarter in countries other than the United States.

The new foundation of the US economy

What stopped us dead in our tracks in the PPI report was this line:

“…a recent PPI analysis shows that most Americans live in states where the tech-ecommerce ecosystem, including all positions and skill levels from fulfillment center and delivery workers to website designers, pays better than manufacturing.”

It seems that 2020 may mark the point at which technology, and not manufacturing, firmly became the cornerstone of the American economy. If, in fact, the tech industry can provide well-paying jobs for people without specialized information technology training, it just may offer the kind of broad-based avenue for economic opportunity that a career in manufacturing once offered to millions of people.

What to watch for

The trends revealed by PPI’s Investment Heroes 2021 report raise as many questions as they answer. But we’re particularly interested in two things. First, will the capital expenditures incurred by the investment heroes in 2020 translate into sustained profitability and revenue growth? And, second, will the growth of the big-spending industries, especially tech and e-commerce, be shared by a lot of companies, or will a few behemoths continue to dominate the arena? We can’t wait to see what the 2022 report reveals.