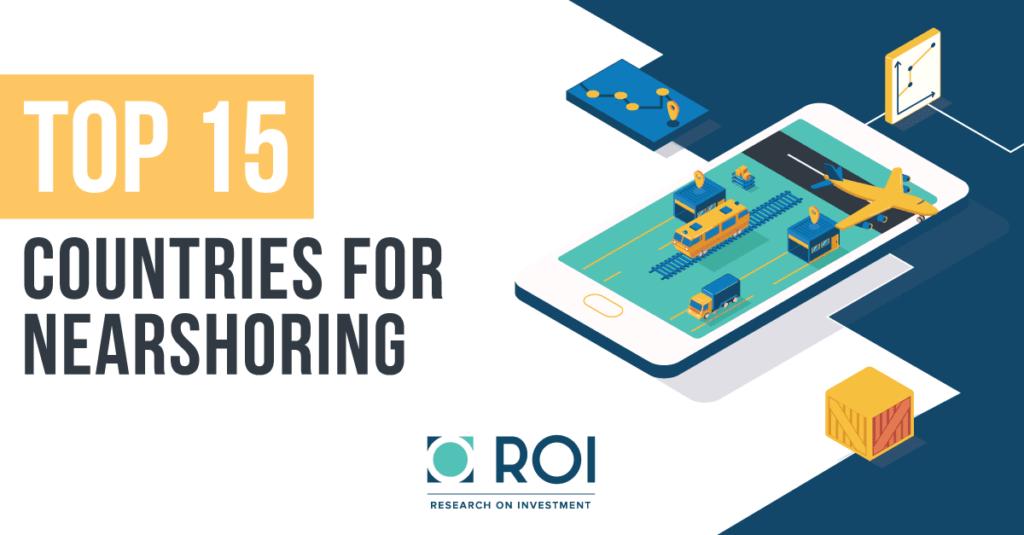 The trend to move operations closer to home and ensure supply chain diversification has been amplified and accelerated in the wake of the pandemic. Shifting production operations to a nearby country closer to the end market for manufacturers is a massive move that can only be filled by a handful of countries. Labor is always a big determining factor but certainly not the only one. Energy costs, infrastructure, trade and business climate also matter significantly. We’ve taken a deep dive into Savills Nearshoring Index which identifies countries that are, or are in close proximity to, major consumer markets with the most nearshoring potential. Learn more about who ranked the highest and why in this country-by-country breakdown. 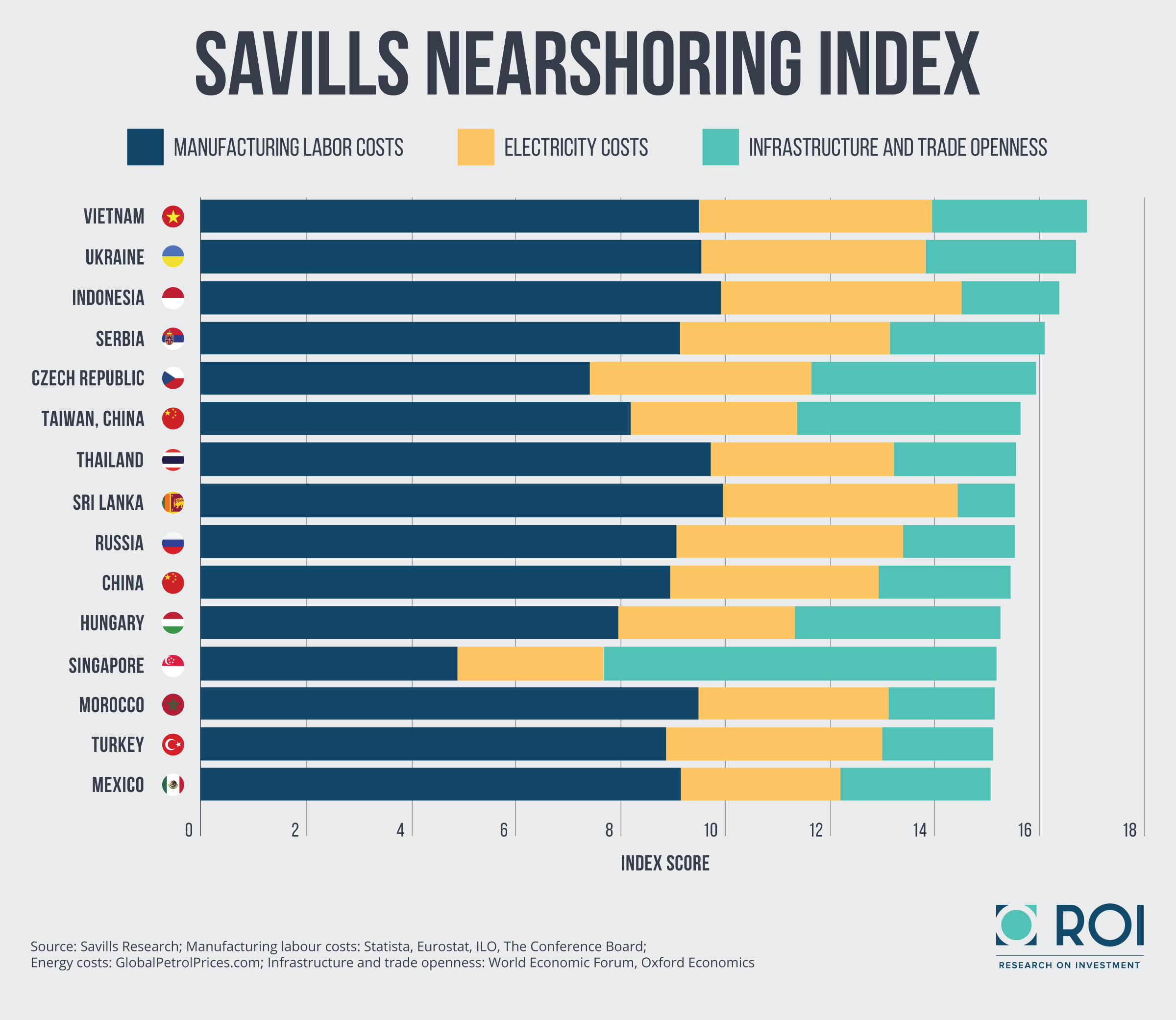 Vietnam comes in first place for the country with the most nearshoring potential. It’s no secret that they are a big player in manufacturing and one of the most competitive alternatives to China. Vietnam has many of the same advantages as China such as low labor costs combined with industrial experience. However, with electricity bills accounting for a significant part of production costs, their low electricity costs is an added benefit. They have undergone severe changes to their energy policies that have led to rapid growth and investment in solar power. The country plans to raise the proportion of renewables in its power mix to 15%-20% by 2030. They will be replacing planned coal-fired power plants with projects using imported LNG – all highlighting their commitment to clean energy. The Vietnam National Assembly has recently approved the EU-Vietnam Free Trade Agreement which will allow European trade to grow even further.

Eastern Europe is an attractive location for nearshoring due to its lower labor costs yet highly skilled workforce compared to other parts of Europe. Average labor costs are approximated one-third of that found in Western Europe. This region is a key area that is set to benefit from supplier diversification in the wake of the pandemic. Prior to the pandemic crisis, the Ukrainian economy had been growing for four consecutive years (2016-2019). It boasts an extremely robust infrastructure, along with an open trade environment. Like other Eastern European countries in the index, its close proximity and accessibility to major consumer markets by road or train is an asset.

Another major player in this space is Indonesia. It is already the largest economy in Southeast Asia and the 16th-largest in the world. One of Indonesia’s strongest assets is its large and skilled workforce. Indonesia is the world’s fourth most populous nation, with almost 271 million people and a median age of 28 years. The Indonesian average wage of $185 is also highly competitive compared to its three major regional competitors–Malaysia ($893), Vietnam ($249), and Thailand ($473). The government is ambitiously seeking manufacturing deals leaving China with efforts such as its recent contribution of  $1 Bil in federal investments through the creation of an industrial park in Java.

Another hotspot in the Eastern European region is Serbia. It’s an attractive option because it is another low-cost market with a quality workforce. Its short travel time between Europe and Asia Minor makes it a desirable location. It’s highly regarded free zones and strong automotive manufacturing industry have allowed Serbia to attract a significant number of foreign investors. The Automotive industry (15.9%) and the Food, Beverage & Agriculture (11.6%) are the major sectors driving FDI.

The Czech Republic is high on the list because of its well-built infrastructure, favorable input costs, and has an established manufacturing economy for exports. Major manufacturers such as Taiwan’s Foxconn, a major automobile manufacturer, electronics manufacturer, play an important role in the economy. In 2019, the Czech Republic exported goods equivalent to 74% of the country’s GDP.

Taiwan is an established tech hub with an exceptional workforce. It also has a great infrastructure and a positive trade environment. And the fact that they are not impacted by the US-China trade war tariffs puts them in a unique position to benefit greatly from nearshoring trends. More recently, they are experiencing a surge in computer and data center demand. Taiwan has seen a rush of high-tech investments that are supported by considerable government incentive programs that include eased restrictions on foreign labor.

Thailand is another rising star from Southeast Asia. It has many of the key ingredients required to be a leading nearshoring location: low labor costs and a friendly international business climate. Its labor costs are less than half those of China. However, it still can’t compete with Vietnam’s lower and younger workforce. Investor confidence has increased for Thailand during the pandemic because of how well they managed it and displayed economic resilience.

Sri Lanka’s apparel industry is a leading supplier of renowned international labels such as Gap, Next, Nike, Tommy Hilfiger, and Marks & Spencer. The country’s geographically strategic location near two high-growth regions (India and Southeast Asia) and low cost labor make it a favorable choice. The Sri Lankan government is also planning to get rid of the 40% foreign ownership restriction in freight forwarding, which should boost investment in the sector.

Russian labor costs are at par with China and even lower than their neighboring Eastern European countries. The devaluation of the rouble makes Russia a cost-effective destination. Added to that is its proximity to both Europe and Asia. The main sectors receiving FDI are the extractive industry, metallurgy, financial and insurance activities, administrative and service activities, manufacturing of vehicles, transport equipment, energy, and real estate.

Even in the face of rising wages and punitive US tariffs on Chinese-made goods, China is a key contender and remains in the top 10. Between 2011 and 2016, labor costs in China increased by 64%. They climbed again by 30% from 2016 to 2020. China is still a highly competitive market that is investing heavily in technology and automation to ensure it continues to move up in the value chain. Their level of speed, efficiency, expertise, and skilled labor makes it one of the best in the world.

Hungary scores solid points for being another practical spot in Eastern Europe for those seeking to expand their operations into Europe. Similar to Ukraine and Serbia, their advantages lie in lower labor costs (compared to Westen Europe) coupled with a highly educated and technical workforce. Hungary’s labor force is highly educated and skilled with a particular emphasis on engineering, medicine, and economics.

Singapore’s overall higher costs are offset by its position as a global logistics hub and export link. For a small city, they are home to the world’s largest transshipment container port and linked to over 600 ports worldwide. Although other Asian countries might be less expensive to operate in, its attractiveness lies in its outstanding logistics connectivity, strong supplier base, excellent service infrastructure, ease of doing business, and intellectual property protection. According to Savills, “Automation will be key to unlock the nearshoring potential of markets such as Singapore, however, where suitable buildings and production workers are in short supply.”

Morocco provides a stable environment for those looking to reduce their supply chains. It is one of the few countries in the world that have free-trade deals with both the US and Europe. “Morocco is very well positioned because of its proximity, because it’s part of EU’s regional trade agreements, its rules of origin are kind of integrated with those of the EU,” said UNCTAD’s Alessandro Nicita.

Turkey is another serious option for nearshoring with it being so close to so many consumer markets (Europe, Middle East, & Africa ). It is already a leader in many manufacturing sectors such as the apparel industry mainly due to its widespread and innovative manufacturing power. In the European market, a McKinsey & Company survey reported that 29% of respondents expect Turkey to be the biggest winner in nearshoring for the region, with Morocco coming in next with 10%.

Mexico continues to be the highest-ranking country in the Americas. Even though it has been a hotspot for decades, we are seeing even more US based companies eyeing Mexico under the current global political and economic climate. It has all the key factors that make it ideal for those seeking to move production closer to the US. Labor costs are a tenth of those in the USA. Overall, Mexico is hard to beat with a young, high quality, and lower cost workforce than that of the US. The average age in Mexico is 29, which makes it one of the youngest nations in the world. Mexico is set to benefit from the rising wages, tariffs, and trade war with China.

Want to learn more about nearshoring and reshoring? Get a copy of our eBook in the Great Reset series: Understanding the Reshore Seesaw. This new eBook is a deep dive into everything you need to know about reshoring and how it may play a role in your investment attraction strategy.

By ROI Team|October 14th, 2020|Categories: Business|Comments Off on Top 15 Countries for Nearshoring

About the Author: ROI Team