The IOT Revolution: 5 Industries that will Change Forever

Slowly building momentum over the last ten years, the era of the Internet of Things (IoT) has arrived. The number of web-connected gadgets is growing exponentially and shaking up old industries with an abundance of data. The IoT industry is one of the fastest-growing tech sectors, and unlike social media, which is governed by the titans of Silicon Valley, the IoT space remains unconquered, with many companies, small and large, staking claims. As you’ll learn in this article, the IoT sector is the perfect place for economic developers to focus their attention on for investment attraction opportunities.

To help you with this process, we’ll share the fastest growing companies in this sector, along with the top places around the world with the most IoT companies.  Now, let’s dive into some of the industries already transformed by the technology, as well as some challenges it will face moving forward. 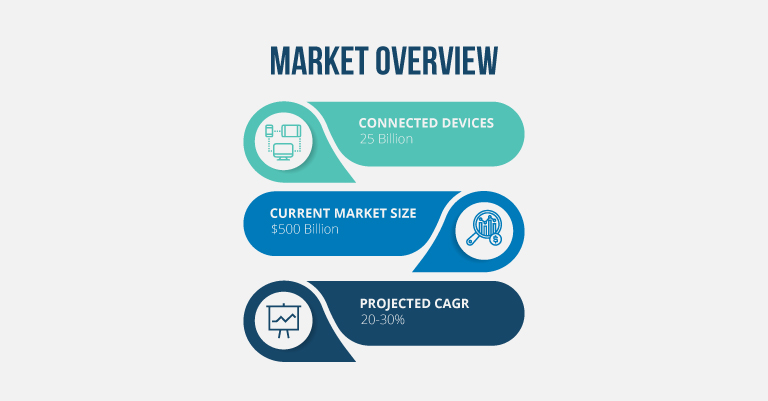 Like many nascent industries, the IoT landscape is still quite fragmented, with large tech companies like Cisco, Google and Microsoft enjoying strong but relatively small positions. The industry is also highly segmented, with each segment requiring a very different set of resources and expertise, which poses a unique challenge for big firms seeking to consolidate. The industry is amenable to startups and smaller tech companies, as the barrier to entry and cost of innovation are still relatively low. This is especially true for the consumer market, which centers mostly around household goods and wearables. Virtually any household appliance, from tea kettles to vacuum cleaners, can “get smart”, leaving many unconnected products up for grabs for ambitious but small tech companies looking to get into the market.

The Internet of Medical Things (IoMT) is one of the largest and fastest-growing healthtech segments, projected by Deloitte to grow at a CAGR of 25% in the years to come and reaching a $160 billion market size by 2022. As a sector that benefits from prompt, high-quality data, the healthcare sector is a natural fit for the Internet of Things. These include wearables to monitor heart rate and body temperature, with internal sensors in the not-so-distant future. The COVID-19 pandemic helped to speed up the trend, with telemedicine and remote monitoring of patients becoming standard practice for the industry.

With hundreds of sensors communicating and informing a central manufacturing “nervous system”, data will come from a wider range of sources than ever before, helping factories fine tune their maintenance cycles, maximize yield, and better understand the hidden costs of each decision.

As Chief Digital Officer at GE Power Steven Martin explained in a recent interview, it’s about economics and better decision-making. “It’s not just about the sensors and the data conductivity. It’s understanding the value and then making decisions on how to optimize that hardware based on the economic reality.” The same is true for transportation, which benefits from traffic updates, route optimization, and predictive maintenance.

From cargo to cabbies, logistics is an industry primed for IoT transformation. According to Allied Market Research, the IoT transportation market is expected to reach $328 billion by 2023, with a projected five-year CAGR of 13.7%. This will largely be driven by widespread adoption in road transport, though penetration is also expected in rail, air, and shipping.

The IoT has already upended the taxi and car rental industries through ridesharing apps. Today, passengers the world over can get a cheap lift in minutes, with hundreds of internet-connected drivers serving as nodes in an on-demand transportation network.

IoT is already baked into our daily commute. As you’ve likely seen, our cell phones each serve as data sources to help increase transportation efficiency. Real-time traffic updates, provided by measuring the speed at which phones are traveling, inform platforms like Google Maps and Waze of the best route, reducing congestion and preventing accidents.

Freight is not far behind. Sensors mounted throughout a truck, for example, can monitor things like oil levels and tire pressure, as well coordinate preventive maintenance. Uber’s freight service has rolled out a number of IoT-driven solutions to help fleet managers better understand and respond to what’s happening on the ground, adjusting routes, maintenance cycles and driver schedules accordingly. 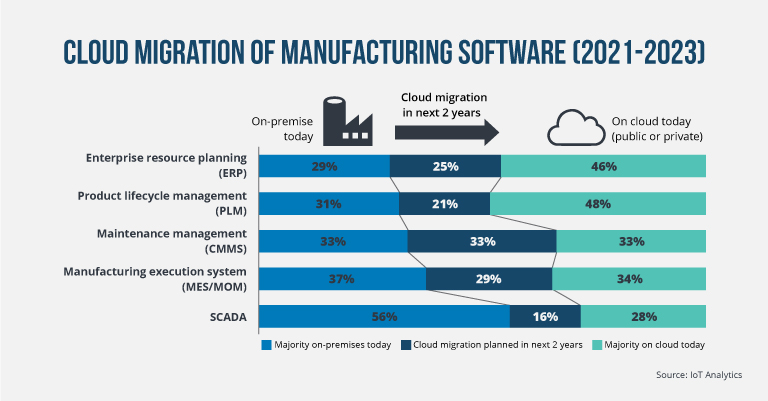 Every industry that integrates IoT technology will require the remote storage, management and analysis of large sums of often-sensitive data. This calls for a dedicated segment to service all the others: analytics and cloud computing. Cloud computing services help to turn the billions of data points generated by the IoT into something actionable. They also help to solve major security challenges, ensuring safe transit and storage of that data.

IoT technology generates a vast number of discrete data points, from sensors or other devices. This data is useless if it cannot be accessed and organized in a meaningful way. The task of secure remote storage and intuitive presentation has emerged as its own segment. Cloud computing giants like Amazon Web Services and Microsoft Azure occupy a leading role, helping to establish a network of disparate devices to consolidate the data they produce. 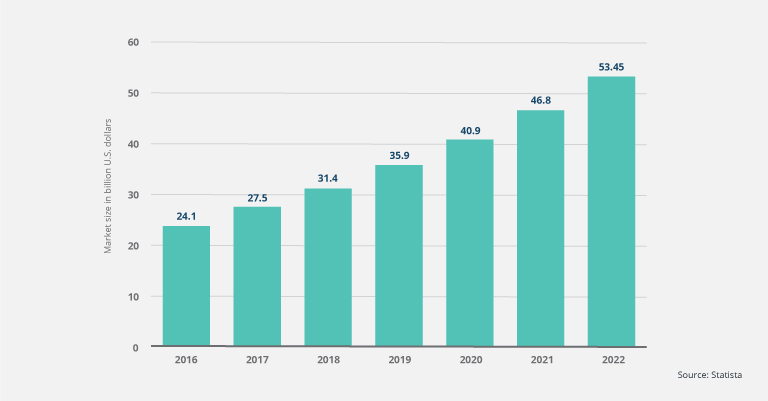 Most people associate the Internet of Things with an arsenal of gadgetized appliances, communicating with one another to maintain a conveniently automated home. While not the largest segment, this is certainly among the highest-profile and most relevant for the everyday consumer. “Smart Home” products, such as Amazon Alexa and smart TVs, are gaining serious traction in 2021, with 65% of Americans using at least one.

The market is expected to grow at a CAGR of roughly 14%, with the American market making up more than half of global demand. The Smart Home segment reflects the broader industry: it’s growing quickly, constantly evolving, and highly fragmented. It’s also attracting a great deal of attention for its security and privacy implications.

Challenges for the Internet of Things sector

While unlikely to slow the rapid growth of the market, there are some hurdles for the industry to overcome, mainly stemming from the implications of having so many devices connected to the internet, especially in the home. Each device, especially in the aggregate, can be used to passively collect more information about the user than she is comfortable or aware of sharing. In this early stage, many IoT devices also don’t have the same security measures in place as more traditional web-connected gadgets, such as phones, computers or modems. These two factors could combine to attract greater regulatory scrutiny, which is already beginning to happen.

Big Tech seems to have overtaken Big Brother as the public’s number one privacy concern, and with good reason. Most governments can’t hold a candle to Google or Facebook when it comes to surveilling their citizens, and an ever-growing network of microphone wielding, internet-linked devices will only make that task easier. Smart speakers like the Amazon Echo are among a growing number of devices accused of eavesdropping on its users and collecting more information than they bargained for.

Though the momentum is in their favor regarding adoption of these new technologies, companies in the space will contend with growing privacy concerns, both from customers and regulators.

As the number of IoT devices in the world grows exponentially (expected to reach 64 billion devices by 2025), so too do potential security flaws. Each internet-connected device represents an opportunity for a system bug or malicious attack to put our privacy, property, and safety at risk.

There have already been several high-profile security issues in the IoT space, including a major flaw with Ring’s camera-enabled doorbells, which could have allowed hackers to spy through the camera. Companies have made headlines over the years for lax security protocols which either put consumers at risk or exposed their data to hackers.

There are many security measures consumers themselves can take to better protect their network and the devices that operate on it. These include changing default passwords on devices, maintaining a separate Wi-Fi network for guests, and disabling unneeded device features. The issue is that few consumers currently do these things, and companies don’t do enough to make them easily accessible.

The privacy and security challenges of this growing market have predictably attracted government attention. As the Internet of Things begins to take off, governments are keenly aware of both public risks and public opinion toward unsecure, nosy devices.

In the United States, the most significant move to date is the Biden Administration’s recent announcement that it would roll out a cyber-security grading system for internet-of-things devices, both to set a minimum benchmark for devices used by the government and to better inform consumers prior to purchase. The United Kingdom and the European Union are rolling out similar regulatory efforts to both ensure device security and curb potential monopolies.

Internet of Things: The Decade’s Challenge and Opportunity

The Internet of Things encompasses nearly all of the challenges, opportunities, and transformational impact of a digitized world. As our tools become more connected, each producing, sharing, and responding to data, the efficiency gains are vast, but so are the dangers for security and threats to the privacy we previously took for granted. As the industry matures, it will impact the entire economy, and new institutions and practices will need to evolve to meet the unique challenges it presents.

Where is IoT thriving? We ranked the top 20 IoT Clusters in the US and globally. Our researchers gathered this data from Gazelle.ai, our AI-Powered Business Intelligence platform built for economic development professionals. The cluster rankings are based on the amount of VC funding, start-up activity, and presence of established companies. It’s no surprise to see places like San Francisco, New York, and London appear in the top three spots seeing as they are the recognized as the tech capitals of the world. Boston ranks top on these lists due to its strong base of world-class universities like Harvard or MIT.

However, places we hear a bit less often — like Detroit — appear top of the list due to their emerging role in the startup scene. Detroit has attracted a lot of IoT companies and tech startups due to its combination of affordability and immense talent pool. In Europe, Paris also stands out as a city with a high number of IoT device manufacturers. Besides top universities and high-tech research, Paris leads the way with remarkable initiatives such as Station F, the world’s largest startup campus.

In Asia, Bangalore has established itself as the Silicon Valley of India. IoT is a hot industry there, in part due to government programs that attract young entrepreneurs, investors, and startups. Talent, higher education, affordability, and government support plays a big role in how these cities become top IoT hubs. 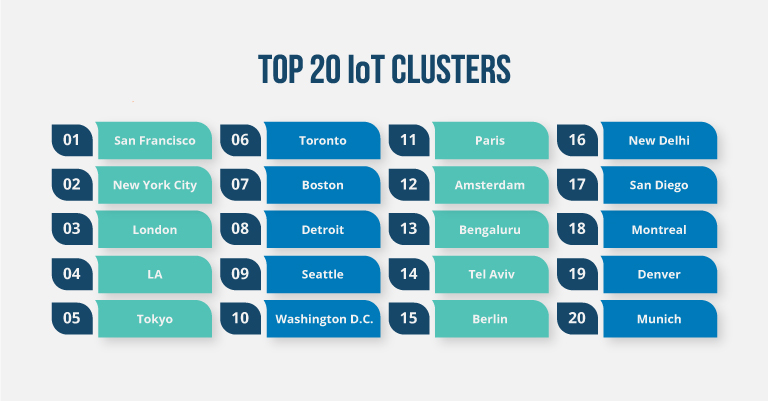 Want to reach out to expanding IoT companies? Here are 20 innovative companies primed for expansion. This data was taken from our AI-powered business intelligence platform, Gazelle.ai. Want more companies like this? Want us to help you target IoT companies? Reach out to us today.